The dream of designing therapies that effectively destroy tumors but spare healthy tissue is the Holy Grail in clinical oncology. Efforts to improve on traditional chemotherapy have led to, for example, immunotherapy, and antibody-based therapies. A new approach in immunotherapy that involves vaccines based on peptide neoantigens promises to bring therapeutic precision to the level of individual tumors in individual patients. 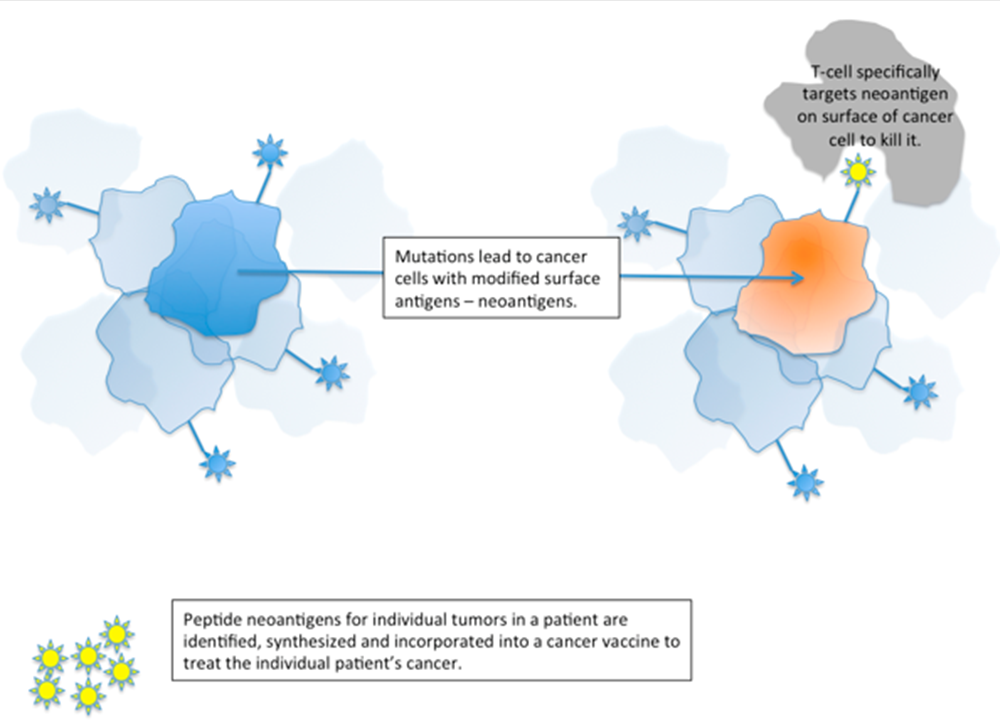 The immune system and cancer

The importance of immunotherapy was highlighted this year when the 2018 Nobel Prize in Physiology or Medicine was awarded to James P. Allison and Tasuku Honjo for “their discovery of cancer therapy by inhibition of negative immune regulation”. Their pioneering work revealed the importance of immune checkpoints that act as ‘brakes’ on the immune system, and their inhibition enables T cells to more effectively eradicate cancer cells (see, for example, https://www.nature.com/collections/gqznlfngkz).

Immunotherapy has been suggested as a promising alternative to conventional cancer therapy for more than a century, mainly driven by case reports of immune-mediated tumor control. In the late nineteenth century, William Coley noted occasional examples of tumor regression in patients with erysipelas, bacterial skin infection, and high fever. This prompted him to inoculate sarcomas with bacteria to engage the patient’s immune system in the fight against cancer. The results could be spectacular for individual patients and Coley has been referred to as the “father of cancer immunotherapy” (1).

More recently, studies on mice have highlighted the role the immune system plays in recognizing and attacking tumor cells at all stages in carcinogenesis in a process called immune surveillance. Added to that, T cells have been shown to recognize tumor cells. As a result, the fundamental influence of the immune system on cancer progression has been designated a hallmark of cancer, which stimulated the development of immunotherapy as a more targeted method of cancer treatment.

The promise and limitations of conventional immunotherapy

Immunotherapy treatment activates T- and B cells that target specific tumor antigens expressed by each patient's unique and frequently changing population of cancer cells. This supports the immune system in its adaption to mutations in the patient’s tumor cells that can lead to resistance to traditional anticancer therapies. Initial efforts in immunotherapy focused on tumor-associated antigens, but these are seldom tumor-specific and are also found in normal cells.

Immunotherapy involving checkpoint inhibitors has been very effective. These block the inhibitory checkpoints that tumors use to protect themselves from immune system attacks, thus restoring immune system function. For example, the first checkpoint inhibitor approved by the FDA, ipilimumab targets proteins that act as molecular brakes for T cells, enabling them to kill cancer-causing cells. These agents are now commonly referred to as checkpoint modulators, or CPMs, since many in development are agonists for the immune system. Unfortunately, not all patients respond to checkpoint inhibitors and of those that do, many relapse. Neoantigens, on the other hand, exploit one of the most important characteristics of T cells – their high specificity, making them specific to tumor cells and, more importantly, the individual tumor cells of a particular cancer patient. This makes neoantigens unique targets for personalized medicine.